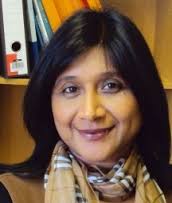 Prof Shanaaz Mathews has 25 years’ experience in the women’s and children’s sectors and has worked within civil society organisations, as an academic, and as an advocate for the women and children’s rights.

Shanaaz is the director of the Children’s Institute, University of Cape Town.  She is a specialist public health researcher and has a PhD in Public Health. She was previously with the South African Medical Research Council’s Gender & Health Research Unit. She is a founding member of the Western Cape Network on Violence against Women and was chair of the network 1999 – 2000, and vice-chair from 2000 – 2002. She currently serves as International Advisory Board  member for the UNICEF Innocenti Research Office Florence , Multi Country Study on the Drivers of Violence,  – Technical Expert and Advisory Group  member– The South African Child Protection Surveillance Study Project – National Department of Social Development; and currently serve on the Childwatch International board.

She has engaged in various policy processes in South Africa, such as the drafting of the Domestic Violence Act of 1999, the monitoring of its implementation through research, and capacity-building of civil society organisations to develop an understanding of the Act.  She also participated in drafting South Africa’s complimentary report to the African Union and United Nations on the Rights and Welfare of Children. She also formed part of the South African delegation who presented to the African Committee on the rights and welfare of the child in April 2014 Her research on child homicides and the link to fatal child abuse has been ground-breaking and provides the first data on the epidemiology of this problem. She also led a study into what carers and children want from services after sexual assault, which identified major service gaps and mental health needs of children and their carers. Her qualitative work with violent men has provided insights into childhood factors in pathways to violent masculinities in the South African context.